A video captured by Wheeler shows their dynamics over a 20-minute period, shown above.

Auroras still have the capacity to surprise. On April 16th, Matthew Wheeler, an experienced aurora-watcher in Robson Valley, British Columbia, saw a green glow forming in the north–then he noticed something odd. “Horizontal lines caught my attention,” he says. “There appeared to be ripples in the aurora.” Six of them are labeled in this 1/2 second exposure: 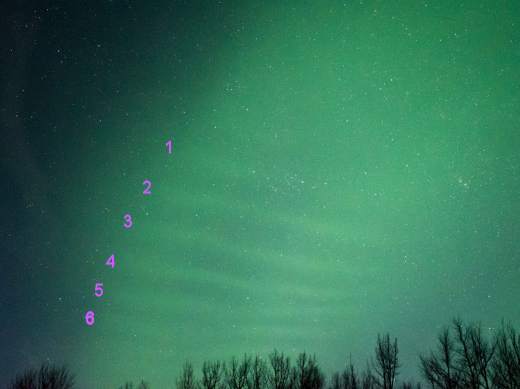 These are “dunes,” a newly recognized form of aurora named after their resemblence to desert sand dunes. A team of researchers first explained them in a paper published just last year. Dunes are a “mesospheric bore”–a type of atmospheric gravity wave that springs up from Earth’s surface and gets caught in a thermal waveguide ~100 km high. When solar wind particles rain down on the bore, they illuminate its rippling structure.