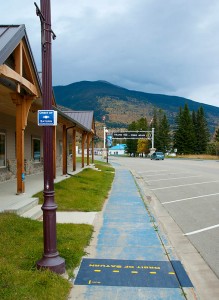 You can have fun with astronomy in McBride even on a rainy day! Starting from the sun (a street lamp near the railway station) travel down Main Street and find each planet’s orbit as you head to the outer solar system. At approximately 3 billion-to-one scale, the walk from the Sun to Neptune is 1.5 km, 3 km return. 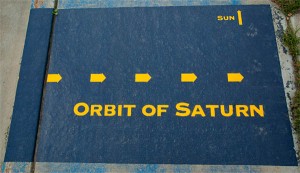 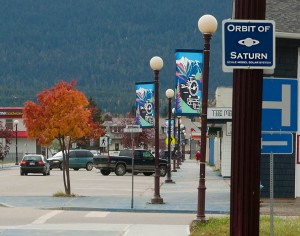 Photo looking from Saturn’s orbit to the railway station, where the model sun is a globe street lamp (visible in the far distance). Click the photo to see a larger version. 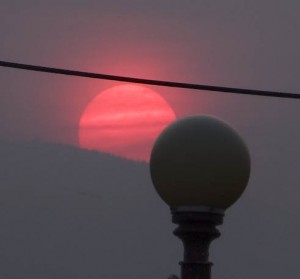 The real setting sun dimmed by forest fire smoke, seen behind the street lamp which serves as McBride’s scale model sun, as photographed by standing at model earth orbit. (This was also a way to show that the scale is accurate!) By looking at this street lamp from other places, such as the model orbit of Mercury (or Jupiter), you can get an idea of how large (or small) the sun would look in the skies of the real planets if you became an astronaut and travelled to them.

Scroll down on this page for maps to find your way around McBride’s scale model solar system, or pick up a free travel guide from the  Visitor Centre in McBride’s railway station any day of the week.

This has been an exciting time in our history for planetary exploration. Thanks to spacecraft from NASA, European and Japanese space agencies, we can see new, amazing, close up views of them. Jupiter, Mars, Venus and minor planet Ceres all have spacecraft in orbit around them, plus two rovers on the surface of Mars. Japan’s Hayabusa2 has sent video of the craft touching down for samples on the asteroid Ryugu!

Looking at the array of planets that were known by people in ancient times but unfathomable to them, it is incredible to think that we live in a time when we have managed to send spacecraft to every one. Here are links to NASA and JAXA web pages showing current or recent missions to each planet: Saturn, Jupiter, Mars, Earth and Moon from one million miles away, Venus, and Mercury (mission now ended).

In addition to rovers crawling over the rocks and dunes of Mars, and the Cassini orbiter making spectacular images of Saturn and its moons, history was made with three other missions.  The Dawn spacecraft has reached its final low orbit around the dwarf planet Ceres, and has revealed mysterious bright spots. Pluto had its first ever visit from Earth as the New Horizons spacecraft dashed by it on July 14, 2015.

On November 12, 2014, in the closest comet encounter in the history of science, ESA sent a small craft, Philae, on a risky landing onto comet 67P/Churyumov-Gerasimenko. Visit this European Space Agency (ESA) link to the best close up views of a comet ever taken: sci.esa.int/rosetta/

By their nature planets are always on the move. For some ways to find out where things are, here are some more excellent links to explore:

Sky News, the Canadian Magazine of Astronomy and Stargazing, with current charts showing where to see many objects in the sky: www.skynews.ca

Up to the moment sun spot and flare information, aurora alerts, space station flyovers, and much more: www.spaceweather.com

The featured planets and maps of McBride’s scale model 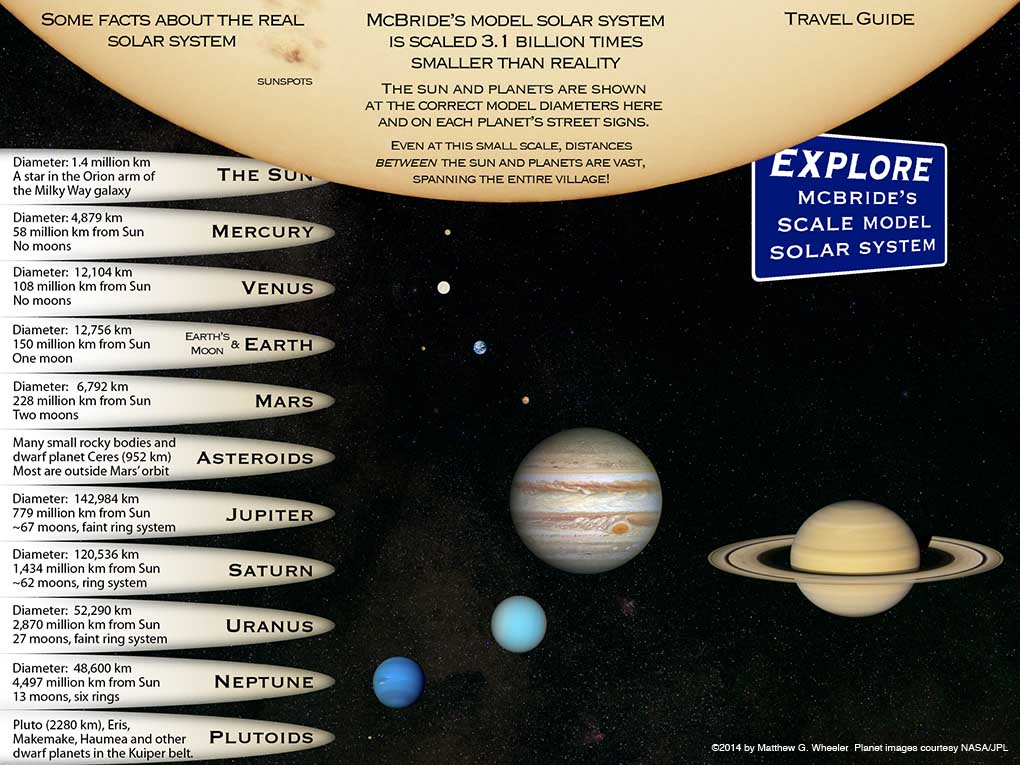 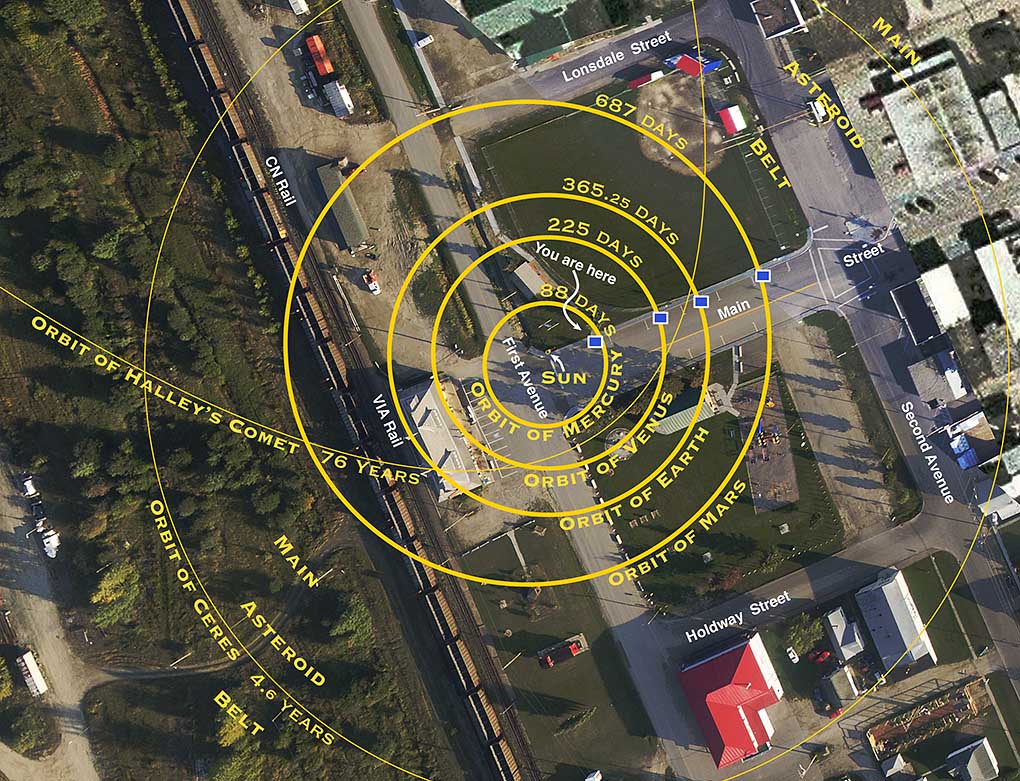 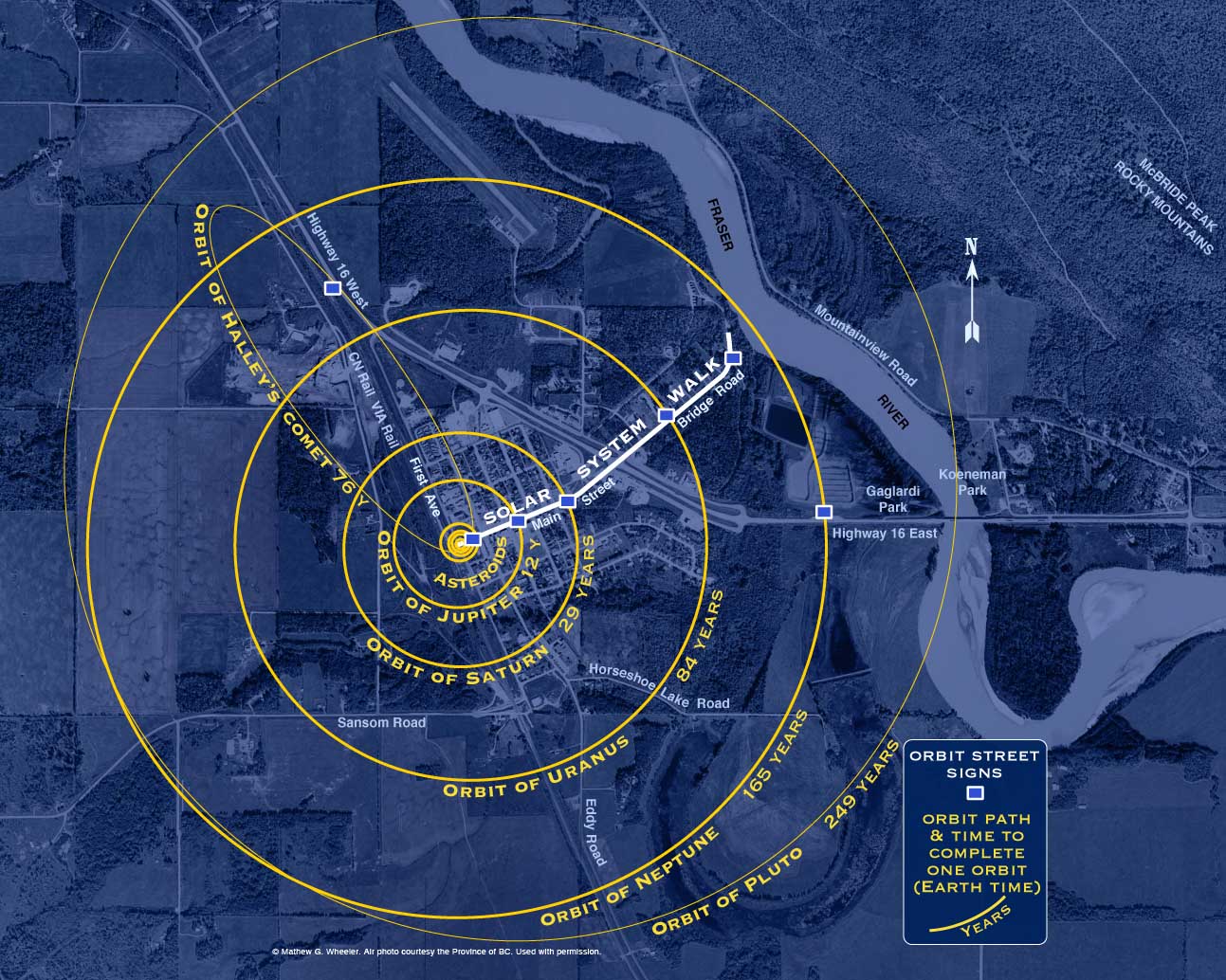 We gratefully acknowledge the financial support of the Province of British Columbia through the Ministry of Jobs, Tourism and Skills Training, the Omineca Beetle Action Coalition, and the Regional District of Fraser-Fort George. Images of planets on brochure cover, Saturn in web page heading and orbital data courtesy NASA/JPL and ESA. Other photos, layout and design by Matthew G. Wheeler. Thank you to the Village of McBride and the many volunteers who made the solar system project possible.